If you’re having problems with blocked waste pipes, the chances are that you need to act sooner rather than later. Common symptoms of blockages include slow draining sinks and toilets that have a rising water level in the bowl when flushed. If you’re having these things happen in multiple places in your home, then you’ve almost certainly got a blockage, but even in one toilet, sink, bath or shower they should not be ignored.

A pressure washer can be used to clear waste pipes with a simple kit that uses a special attachment instead of the nozzle called a sewer jetter. It uses high pressure ware flowing down the waste pipe in order to clear blockages. Always read the instructions carefully to avoid damage to pipework or waste flowing back up your pipes and creating an unpleasant mess.

What Is A Sewer Jetter?

A sewer jetter is a name for the attachment that’s used on the end of a pressure washer hose to make it more effective for clearing drain blockages. In essence, it simply allows you to use a pressure washer to more safely direct high pressure water down waste pipes to dislodge anything that’s stuck and causing water to fail to flow away quickly.

While they’re usually discussed and used by companies that visit residential and commercial properties for drains to be cleared, they’re available to buy for pressure washers as a DIY solution. It’s advisable to call in expert help if you don’t know what you’re doing or have little experience with drainage of waste because pipes can be damaged or waste leakage caused if the procedures are incorrectly carried out.

Where Can I Buy A Sewer Jetter Kit?

The easiest place to get a kit is on Amazon, and have it delivered within a couple of days. Here’s some current options on Amazon: 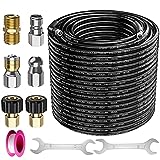 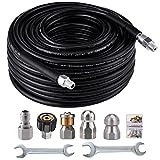 Are Sewer Jetters And Hydro Jetters The Same Thing?

Sewer jetting and hydro jetting are terms that get used interchangeably to mean the same thing in the context of clearing blockages. In the industry, some people would argue that sewer jetting is higher pressure as it relates to cleaning larger sewer pipes, whereas hydro jetters simply relate to pressurised water through pipes and is more likely to mean residential pipe work.

At the very least, though, the process is the same, even if at different pressure.

Most kits are designed to fit standard 1/4 inch connections, however not all pressure washers use standard sized connections. Some manufacturers try to tie their customers into using their own attachments, so have created their own connections. This may be possible to overcome with adaptors, but if that’s the case you’ll either already know what you’re doing or it’s probably going to be a step to far to resolve.

Generally speaking the big brands that you’d associate with trade use will use standard connections, so in those cases you’ll be fine. Kits often contain much longer hoses that come with the pressure washers out of the box, and in most cases can be used as an extension or a replacement for your existing hose. As you’ve probably worked out, using it as an extension with a coupler (often included in the kit) will give a longer hose length overall, useful if the blockage is way down the drain.

What PSI Is Required To Clear A Blocked Drain?

Most residential pressure washers will produce a maximum of up to 400oPSI, with models aimed at a commercial application offering jets that are even stronger. We’re talking about incredibly strong power tools here, and you wouldn’t be wanting to use anything like 4000PSI out of the gate to try and clear your drains.

As a rule of thumb, starting in the 1000PSI range would be reasonable, increasing to 1500 and very occasionally 2000PSI if really necessary and you’ve got confidence in what you’re doing and the strength of the pipework. Anything more is getting into the territory of risking damage to your waste drainage pipes, and that would be a lot more expensive to fix than calling in the professionals to clear the blockages in the first place.

How Much Water Does A Pressure Washer Spray Per Minute?

Pressure relates to how hard a water spray is fired, so isn’t directly comparable to the value of water per minute that’s used. However, most home pressure washers are similar, and typically get through around 15 litres per minute in the higher powered models at their maximum of 4000PSI. That means a litre is dispensed at high speed every four seconds, or 250ml per second.

Where we’re saying 2000PSI is an absolute maximum (and probably too much) for clearing drainage, that would be 125ml/second, or a litre every eight seconds.

Clearly, that’s a lot of water very quickly – much faster than you’d normally expect waste water to flow. Remember we’re talking about water leaving the home through waste pipes here, not the pressurised water coming into your property and dispensed at pressure from the taps.

Can You Use Sewer Jets To Clear Tree Roots?

While tree roots are sometimes cleared using sewer jetting techniques, that’s more than the average homeowner is likely to be able to deal with themselves. For a novice the chance of causing damage is too high, and exterior sewer pipes can collapse if damaged by tree roots, causing additional hazards and unstable ground.

Tree root damage to sewers needs professional attention, not just a homeowner with a pressure washer and a hydro-jetting kit bought from Amazon!

petrolpressurewashers.com is a participant in the Amazon EU Associates Programme, an affiliate advertising programme designed to provide a means for sites to earn advertising fees by advertising and linking to Amazon.co.uk.